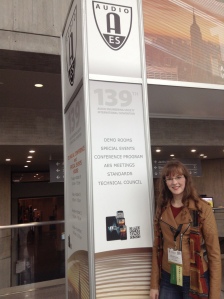 I was very proud to speak at three events during the Audio Engineering Society convention last week!  My hour-long presentation last Sunday was entitled “Interactive Music of the LittleBigPlanet Franchise: Dissecting a Complex, Multi-Component System.”

AES was a tremendously exciting and informative convention, and we all had a great time discussing the future of game audio!  Here’s a photo from my talk on the interactive music of the LittleBigPlanet franchise:

And here’s a brief video excerpt from my hour-long talk, “Interactive Music of the LittleBigPlanet Franchise: Dissecting a Complex, Multi-Component System” –

For this year’s AES Convention, a rare honor was bestowed on the AES, as the Empire State Building was lit in the signature AES blue and white to acknowledge the opening of the 139th International AES Convention.

This year, the 139th AES Convention brought together the world’s largest gathering of audio professionals for four days of audio technology, information, and networking.

From recording and production, to broadcast and streaming, game audio, live sound, post-production, sound for picture, product design and more, attendees had the opportunity to hear from top audio industry figures while immersed in the latest research and technology through informative presentations and special events.

Furthermore, the AES presented the year’s only dedicated professional audio-focused convention, drawing attendees from every market sector and level of involvement – from students and enthusiasts to leading professionals from every corner of the industry.

I was very proud and excited to speak at the 139th AES Convention!  Many thanks to the Audio Engineering Society!

2 responses to “AES Convention: Interactive Music of the LittleBigPlanet Franchise”